Today is the 6th March. In this day of the year, 20 years ago we performed our first gig.

The 6th March is for us the really “anniversary-day” of the band, because in our idea, a band “borns” the first day that tramples on a stage. Everything that happened before is like a gestation matured in the rehearsals.

But, like every birth, there is a “labour” phase before the “delivery”:

B.J. (the guy that was at guitar&voice) was the last one to reach the meeting point (like practically always), me (Pav) and Fly (the guy that was drumming) were waiting discussing which songs we need to try out that session.

After a quarter of hour of delay, the “Malaguti Fifty-Top” of B.J. made himself hear from the bottom of the courtyard. While he was parking, started apologizing:

“Sorry guys, I was blocked at school from my gym teacher…. you know that in my school we have some guys in visit from the U.S., well, next saturday there will be a party for them….. and, he asked if we can play! Obviously I accepted!”

So we ran inside the rehearsal and we started trying the cover we knew as many times as we can…. but after a couple of hours Fly gave up disconsolate, he felt himself not ready for playing a gig.

We passed all the saturday evening trying to find guys that we knew were drumming, booking him for the next saturday.

Well, it was 20 years ago, and at that time not all guys had a mobile phone, and the social networks did not exist….. so we went through all the pubs and parks of the city searching for that guys. After three hours we had the man: Mirko (Eng for the friends).

He accepted (like a true madman) to play with us the next saturday, obviously without any rehearsal sessions. We decided the gig track list that night.

Me, B.J. and Eng we met outside school for a fast meeting about how organise ourself for that saturday: the P.A. was up to the school (ok), the amplifiers were up to us (ok), the drums were too up to us (not ok).

We haven’t any drums or cymbals.

Moreover we haven’t any band’s name too……

Ok for the name we solved in a half hour (Green Arrows), for the drums we have to find someone that can lend or rent.

Bolzano, 100’000 inhabitants, no one has a drum set to give to us for one day. And we needed one the day after.

But, were the genius, if cornered, has no limits: we set up a plan that if worked saved our gig.

We went to a music shop nearby our rehearsal and we introduced ourselves to the shop assistant as “a band that likes to buy a drum set for its rehearsal”… well, we have only 10’000 Lire in our pockets (roughly 5 today euros).

After the view of four different drum set I broke the situation with a proposal:

“The last one convinced us a lot, and the price is good. For us is big investment, we are 17 years old and for us these are very big moneys. Can we take it to our rehearsal tomorrow, so the drummer can try it out? If it works we will pay it to you. In the remote case it doesn’t suit him, we will bring it back to you before evening. Obviously I will leave to you a document of one of us.”

I won’t tell you anything more about the gig, except that we were excited and frightened like every 17 years old boys at his first experience on stage and that we played enough good for giving us the will to proceed with “Green Arrows”.

But I leave you with a pictures of that day. Forget about the location, or our look, dress and postures. But appreciate the yellow card hanging from the tom tom: it’s the price label of the drum set we need to leave there for returning (obviously) it some hours after. 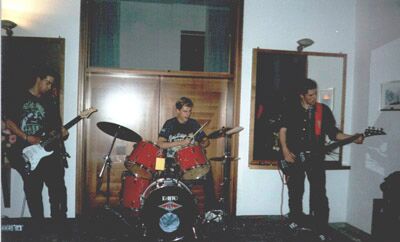 TO THE NEXT CHAPTER